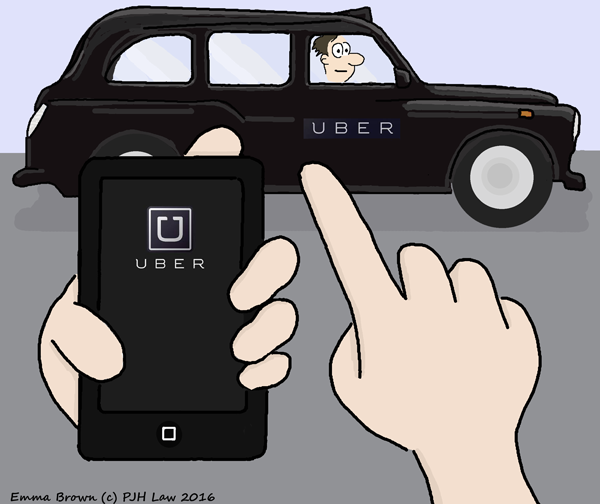 Today’s case of the week is the case involving Uber. If you have not yet done so, read the judgment. It is very well put together on uber drivers. The decision will be read around the world. Careful readers of the footnotes will see that two greats of English Literature, William Shakespeare and John Milton, are quoted in the judgement.

Many readers will no doubt smile when Uber and their witnesses are gently mocked in the Judgment for the case they put to the Employment Tribunal. The case could be seen as part of a broader picture. The owners of capital (the 1%), here the owners of the Uber-intellectual property, were living off the Uber drivers (the 99%) by earning 25% of each Uber fare.

The owners of capital may have put their income owning asset, the Uber holding Company, into the most tax efficient jurisdiction,  thereby avoiding UK corporation tax on their earnings.

The questions before the Employment Tribunal on uber drivers were:

2.       If so, is Dutch law the applicable law as the holding company of Uber is headquartered in Holland.

The facts are these. Uber has a number of apps including UberX, UberXl, UberExec, UberLux, UberTaxi, UberWav. The difference in the apps relates to the difference in size and comfort of each vehicle.

Customers download the Uber apps onto their smartphones. Customers register their details with Uber including bank card details. The customer then sends a request for a trip. Uber locates the nearest Uber drivers and sends the driver the customer location and customer rating. The Uber driver has 10 seconds to confirm whether to accept the booking. If the booking is accepted, the Uber driver picks up the customer and takes them to their destination using an Uber suggested route. The customer pays Uber the agreed fee. Uber takes 25% of the agreed fee and then remits the balance to the driver at the end of the week.

Uber’s key witness was a Ms Bertram. The Tribunal described her evidence as “grimly loyal.” Ms Bertram’s evidence was that Uber was a platform. The platform enabled drivers to “grow their business”. Uber did not employ anyone, interview anyone or provide “jobs”.

However, the Tribunal concluded that the legal documentation that the drivers were signed up to did not reflect the reality. Furthermore contrary to what Ms Bertram said in evidence Uber did “interview” drivers and in their PR pieces described themselves as providing thousands of jobs in London.

Uber did exercise a high degree of control. Uber drivers were “on board” by Uber. Uber drivers’ cars were preferred to be silver or black and had to be less than 10 years old.

If an Uber drivers’ average customer rating fell below 4.4 then there would be a period of training for the driver.If the rating still remained below 4.4% then Uber would disengage the driver. Uber could claw back drivers’ earnings if a customer complained. If a driver declined 3 offered trips in a row the driver would not be offered any for 10 minutes – effectively the driver would be sin-binned.

Uber drivers were not paid by the customer and the price for the trip was determined by Uber not the driver. Furthermore contrary to Ms Bertram’s suggestion the only way an Uber driver could grow their business was to spend more hours behind the wheel.

1.       Get real, Uber, of course, the drivers are your workers. The reality is that once a trip was accepted by an Uber driver the driver was personally engaged by Uber and had to do the trip. The drivers met the definition of worker.

3. Workers will benefit from some employment rights such as the right to a living or minimum wage and rights under the Working Time Regulations, in particular, holiday pay.”

The big question that was not asked of the Tribunal was whether the drivers were employees. That would have been a very interesting question as once a trip was accepted there was, arguably, mutuality of obligation. In the meantime labour in the form of Uber drivers scored a notable victory over the owners of capital, Uber. Karl Marx in Highgate Cemetery, down the road from the London Employment Tribunal, no doubt would have enjoyed the victory.