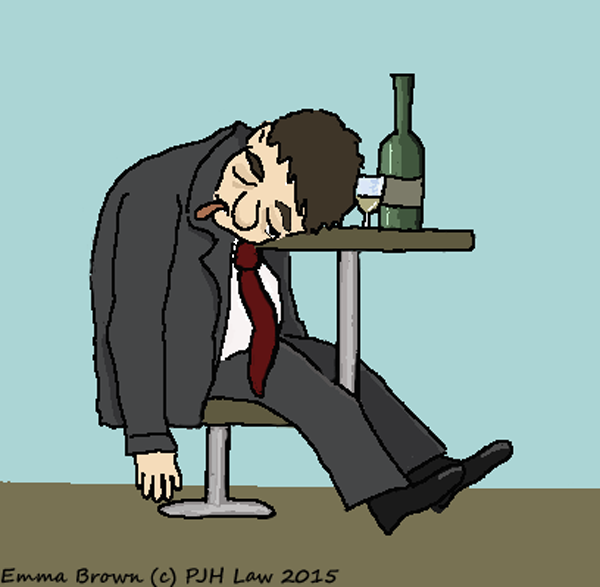 It’s September which means autumn has begun and rather than spend our evenings at barbecues we stay in and watch telly.

Speaking of which todays case has its fair share of drama, alcohol and bullying.

Can you suspend an employee for his conduct after allegations are made against him during an investigation into the same employee’s grievance?

Is it acceptable to anonymise witness statements in a disciplinary investigation?

Mr Mulvihill, the Claimant, was employed as an MOT tester by Now Motor Retailing Ltd, the Respondent, a car servicing and repair company. The Claimant had received two final written warnings which had both expired prior to the events culminating in his dismissal

The Respondent had a strict alcohol policy which stated that the consumption of alcohol during working hours was strictly prohibited, this included lunch time. Any employee found under the influence of alcohol, which the Respondent classified as being able to smell it on an employee’s breath.

The Claimant lodged a grievance against his manager in relation to the way he was treated and work was distributed. The grievance was investigated and rejected, during the investigation the Respondent heard allegations that the Claimant had consumed alcohol in work time and bullied his co-workers and manager.

The Claimant was suspended and a disciplinary investigation was carried out. The Respondent interviewed some of the Claimant’s colleagues who reported that he was regularly argumentative and abrasive with staff particularly after lunch where he reportedly went to the pub and came back smelling of alcohol.

The Claimant received anonymised statements prior to his disciplinary hearing, bar one, his manager’s, who feared the Claimant would retaliate as he knew the manager’s address. At the hearing he picked apart most of his colleague’s accusations but did admit he went to the pub of lunchtime but did not drink alcohol or smell of it afterwards.

The Claimant was dismissed because the Respondent believed that the corroborating evidence of his colleagues and his own admittance to going to the pub meant that the Claimant had probably regularly worked under the influence of alcohol.

The Claimant bought an unfair dismissal to Tribunal and despite giving muddled evidence the ET stated that because some of the Claimant’s colleagues had not been interviewed, the Claimant wasn’t interviewed, there were no confirmed reports of him actually drinking alcohol and because the statements were anonymised and one was withheld meant that the disciplinary process was flawed and dismissal unfair.

It elaborated by saying that the Respondent did not have reasonable grounds to even suspend the Claimant following the grievance he raised and thus no contributory fault or Polkey reduction was applied. The Respondent appealed.

The EAT found that the Respondent had substituted its own view when determining what response a reasonable employer would have taken in deciding to suspend and dismiss the Claimant. It stated that the witness statements given by the Claimant’s colleagues give enough evidence to allow the Respondent to reasonably assume the Claimant had consumed alcohol during work hours. It also stated that many of the ETs criticisms of the Respondent’s disciplinary process were unfair as they had sound reasoning. For example anonymised statements were to protect the employees due to their fear of the Claimant. The appeal was allowed.

To answer todays questions. Yes you can if you have enough evidence to reasonably believe the employee has committed a misconduct offence and you have concluded the grievance. It is also acceptable to anonymise witness statements providing you have good reason to do so. In this case it was a duty of care to the witnesses.